President Donald Trump was sworn into office on January 20, 2017, beginning the important first 100 days in office. The stock market had already greeted the incoming president with a rally that caused the Dow Jones Industrial Average to surge nearly 1,500 points following the election. Some say the rally was a reaction to President Trump’s anticipated pro-economic growth policies. It’s even been called the “Trump Bump” by some and “The-election-is-finally-over rally” by others. Does a president’s first 100 days in office provide insight into the stock market’s performance for the next four years?

Since President Eisenhower’s election, the stock market has risen nearly 70% of the time from Election Day until year end and 75% of the time from January 1 until the inauguration. The Trump Bump is not an unusual reaction based on historical returns for newly elected presidents. Let’s look at the first 100 days of nine of the most recent presidents: 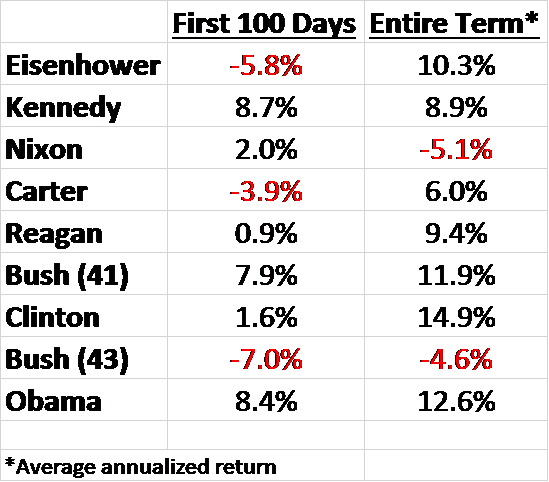 A quick review of the numbers doesn’t indicate any clear patterns pointing to the direction of the market. The significance of the first 100 days in office has been watched closely since Franklin Roosevelt’s (FDR) first term as president. In President Roosevelt’s first 100 days, he had made it clear the government was going to take an aggressive role in reshaping the economy. The accomplishments of all new presidents since then have been compared to FDR’s first 100 days. 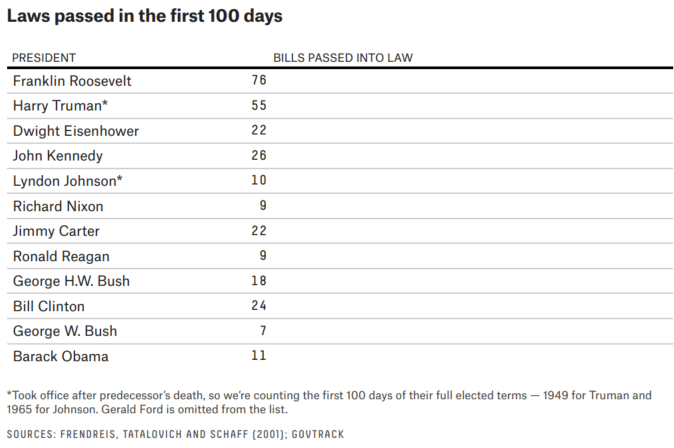 Whether the president’s own party controls the House and Senate has a huge impact on passing legislation as well. President Trump has the edge in his first 100 days as the Republican Party has a majority in both houses of Congress. FDR himself had large Democratic majorities in Congress to help him enact his agenda.

The condition of the economy is also a large factor in the ability of a new president to take action. FDR took office during the Great Depression. The country wanted the president to take action that would improve the economy. Former Chief of Staff, Rahm Emanuel, of the Obama Administration said, “You never let a serious crisis go to waste. And what I mean by that it’s an opportunity to do things you think you could not do before” in an interview with the Wall Street Journal on November 19, 2008. He was referring to the Great Panic that was already underway and would greet President Obama during his first 100 days in office. 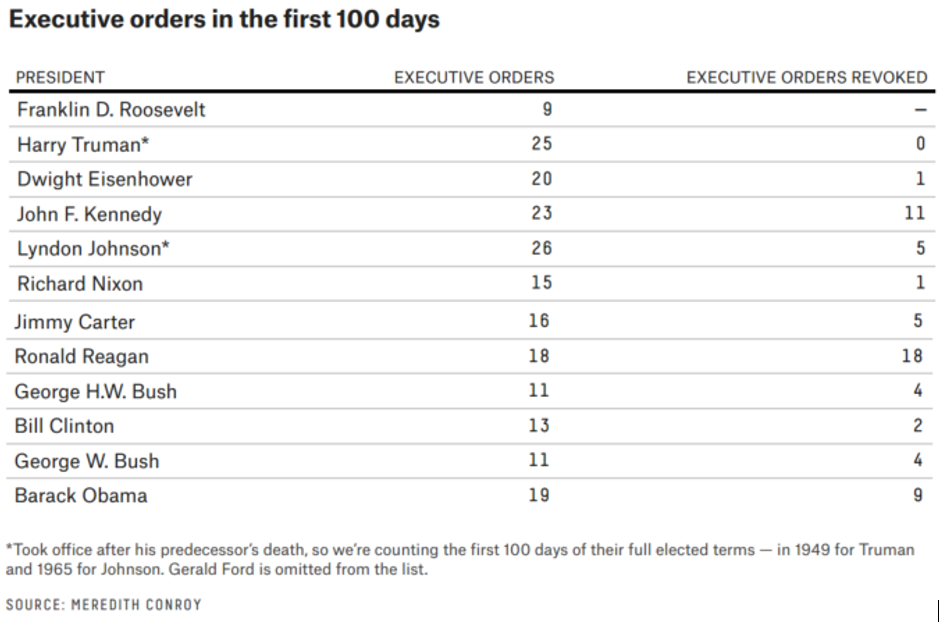 It’s important to remember that activity in office does not equal effectiveness.  Once again, FDR’s terms stand out as the legislation he passed ushered in the New Deal. The country was already several years into the Great Depression when FDR took office. Pressure had been building for action to be taken that created an ideal political environment for FDR to pursue his agenda.

President Trump has inherited an economy that is in relatively good shape.  Unemployment is low, the economy has been growing—albeit slowly—the stock market is reaching new record highs, and the Federal Reserve believes the economy is strong enough to allow interest rates to start moving up.

The president has Republican majorities in both houses but some of his priorities are not in line with Republican positions. President Trump will have a more difficult job of implementing his agenda than FDR did. Passing some of his legislation will first require compromise within his own party.

As we look beyond the President Trump’s first 100 days, it’s important to remember that presidents and politics do not drive stock prices in the long run. Corporate earnings drive stock prices. Presidential policies and legislation can have positive or negative impacts on earnings, however.  Historically, companies have figured out how to adjust to the political policies that affect earnings negatively. They adjust business plans and most are ultimately able to resume earnings growth.

Your investment strategy should focus on achieving your long-term financial goals, and not on trying to figure out who will win or lose during the next presidential cycle. Maintain a diversified portfolio with the correct allocation between stocks and bonds regardless of how the president does in his first 100 days.