What Those Extra Letters on Your Medicare Card Mean 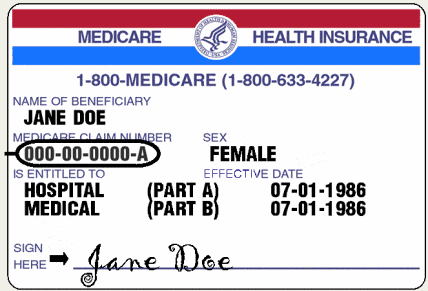 Clients often ask us about the meaning of the letter suffix on their Medicare card. Your Medicare number (also called Medicare Claim Number) is usually your Social Security number followed by a code. The code may only appear on your Medicare card but it is assigned by the Social Security Administration to identify the category you qualify under to claim benefits.

The number portion could be your spouse’s Social Security number to indicate you qualify for benefits because of your relationship to them. The nature of your eligibility is then indicated by the letter code that follows.

In all, there are 12 letters that may follow the numerical part of the number. A letter code can be followed by additional number suffix letters. Letter code “A” is the most prevalent code. It denotes a primary claimant who is retired and has paid into the Medicare system as a wage earner for at least 40 quarters.

It’s important to understand that the letter codes in your Medicare number have nothing to do with enrollment in the various parts of Medicare that are also identified by a letter A, B, C, or D. In other words, it does not mean you are enrolled in Medicare Part B if your number ends with the code “B”.

The following is a brief explanation of the other more common codes:

Code B – claimant is drawing on their living spouse’s work record. B applies to a wife drawing on a husband’s record, while B1 is for a husband drawing on a wife’s record. Numerical suffixes continue to 9 (with B9 being the Medicare number suffix for a third husband). The spouse’s or ex-spouse’s Social Security Number will be the first nine numbers for anyone with the suffix code in the “B” category.

Code C – this category applies to child Medicare beneficiaries. Numerical suffixes following “C” indicate the child’s relationship to the primary claimant. The youngest child gets code C1, the next youngest gets C2, and so on through C9 and then from CA to CZ.

Code D – this category is for anyone claiming based on a deceased spouse solely due to age. D and D1 represent a widow or widower over 60 and are the most common codes. Other codes apply to surviving divorced spouses, as well as widows and widowers who remarry.

Code E – this category applies to widows and widowers who are also parents of qualifying children. “E” is a particularly complicated category given the many variations.

Code F – this is the parent category. These codes are assigned to dependent parents of the worker who earned Medicare benefits. All “F” codes are followed by a number to signify the relationship.

Codes J & K – these categories are for workers and spouses respectively who become eligible for special Medicare benefits without drawing Social Security. Varying codes apply depending on whether the worker has enough quarters of employment to earn Part A coverage or if they have to pay for it separately.

Code W – category applies to disabled widows and widowers. W is for widows and W1 is for widowers, while those who’ve been previously married may have different W-category codes.

Most retiree’s Medicare cards currently begin with their Social Security number, which is the most valuable piece of information for an identity thief.

President Obama signed a bill in 2015 that will end the use of these numbers on Medicare cards. Medicare has four years to start issuing cards with new identifiers.

The details have yet to be worked out but it is generally believed that Medicare will replace the Social Security number with a randomly generated beneficiary identification number. Changing numbers is a huge undertaking and has not been a priority due to the implementation of the Affordable Care Act (ACA).