Clients frequently ask me how they compare financially to their peers. There are different ways to measure wealth, but it helps to have benchmarks to offer any form of comparison. The federal government’s Fall 2008 Statistics of Income (SOI) Bulletin is a good place to start. The report provides data compiled from tax returns, other official documents, and analytical studies. The latest SOI bulletin (The data is from 2004) includes a wealth of information on the nation’s wealthiest individuals.

By the bulletin’s definition, an individual who had a gross estate worth more than $1.5 million (the exemption for federal estate tax in 2004) was wealthy. About 2.7 million Americans holding $11.1 trillion in assets qualified and, after accounting for total debts of more than $850 billion, this group had a combined net worth of $10.2 trillion. It’s interesting to note that while this is a lot of money, it would not be enough to pay off the national debt. 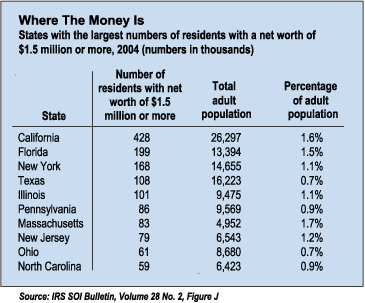 Though these officially wealthy individuals comprised only 1.2% of the adult U.S. population, they held 20.3% of the country’s total net worth. Consider these details:

The statistics for women were similar with a few notable exceptions. Compared with men in each wealth category, women held proportionately more of their assets in personal residences and stock and less in business interests.

This is the most recent information available. How do you compare?