Three Common Pitfalls To Be Aware of When Taking Your RMD 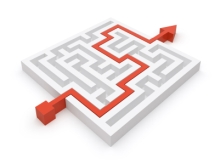 Taxpayers reaching age 70 ½ this year will discover the meaning of tax deferral. A portion of the funds they set aside in retirement accounts to avoid tax while they were working will start to become taxable each year. It’s time to pay the piper or the IRS in this case. Required minimum distributions (RMDs) are about to begin. RMDs have some quirky rules and mistakes are common. Mistakes are so common the IRS created Form 5329 for taxpayers to report mistakes on RMDs as well as for reporting other retirement plan errors.

Let’s start by reviewing the basics. A taxpayer’s first RMD must be taken by April 1st of the year following the year they turn age 70 ½. The RMD is due by the end of each year thereafter. The amount of the RMD is calculated by taking the balance of all the taxpayer’s IRA on December 31st of the prior year and dividing it by your life expectancy found in the IRS’s Uniform Lifetime Table. If the taxpayer’s spouse is the sole beneficiary and is more than 10 years younger they will use the Joint Life and Last Survivor Expectancy Table. Use the age you will attain in the year you reach age 70 ½. Even if you wait until April 1st of the following year the calculation is based on your age in the prior year. For example, if you turn 70 ½ in the first half of the year, you will turn 71 before the end of the year. Therefore you would use age 71, even if you wait until March 31st of the next year, to calculate your RMD.

That’s basically all there is to it. Calculate the right amount and withdraw it by the due date. However, if you miss the due date or don’t take out enough, there is a 50% tax penalty for any shortfall. It’s time to review the common mistakes.

What if I have more than one IRA?

Multiple IRA accounts can be aggregated to calculate the RMD and the withdrawal will only need to be taken from one of the accounts. Traditional IRAs, SEP IRAs, SIMPLE IRAs can all be handled this way. An inherited IRA cannot. The inherited IRA must satisfy the RMD separately. Roth IRAs are not subject to RMDs and should not be included in the total.

Employer plans are subject to RMDs and the RMD cannot be satisfied by taking from an IRA. Taxpayers who are still working get a pass at age 70 ½ as long as they don’t own more than 5% of the company. The due date for the first RMD from their company plan after they turn 70 ½ will be April 1st of the year after they separate from service.

The working taxpayer is still required to take RMDs from their IRAs. A common mistake happens when taxpayers assume their IRA qualifies for the same exception as their 401(k).

There is another exception for taxpayers who participated in a 403(b) plan before 1987. For these plans the RMD for contributions made before 1987 do not have to be taken until age 75. Taxpayers should have a statement showing the plan balance on December 31, 1986 as documentation to prove the exemption. Any funds contributed on or after January 1, 1987 and the earnings on the pre-1987 balance are subject to the age 70 ½ due date making this a complicated calculation to track.

The standard April 1st RMD applies to all other amounts in the plan, including earnings on the pre-1987 balance. Due to attrition, this exception applies to fewer people each year, but advisers should still know about it.

How is the RMD determined for an inherited IRA?

RMDs from inherited traditional IRAs and Roth IRAs must generally begin by December 31st of the year after the year of the original owner’s death and be taken by the end of each future year. There are special exceptions for spouses who inherit. The 50% tax penalty applies to missed RMDs from inherited IRAs and Roth IRAs even though they are tax free.

RMDs from the deceased IRA owner who was past age 70 ½ must be taken by year end by the beneficiary. The beneficiary takes the year-of-death RMD and reports the income on his or her tax return. It does not go on the decedent’s final income tax return or on his or her estate income tax return. The year-of-death RMD is based on the amount the decedent would have had to take had he or she lived. The following year, the beneficiary calculates the amount based on the longer of his own life expectancy or the deceased owner’s remaining life expectancy.